I could start introducing the Da Vinci Group founders as two visionary neuroscientists who have designed a curriculum for enrichment workshops based on the fundamentals of Neuroeducation – using clay as a medium.

But that wouldn’t do them or the work they’ve done for our community any justice. 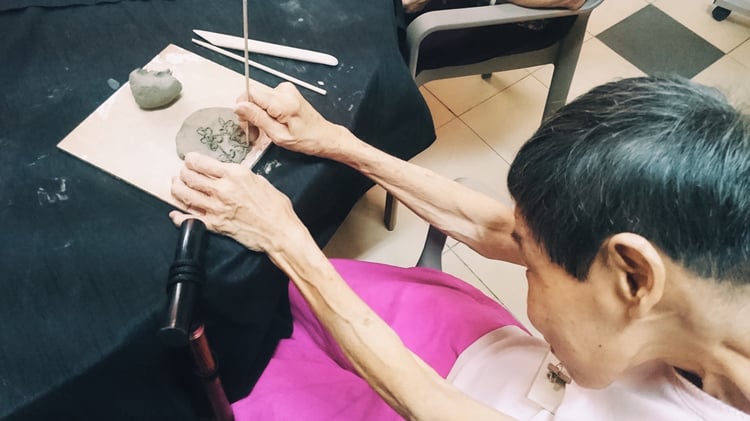 The Da Vinci Group story was born from Amutha’s love for pottery and Saravanan’s passion to help the community, as well as their fascination with how the brain biologically learns. So they marry the therapeutic qualities of clay with the principles of Neuroeducation that is to engage the senses – and NeuroCeramicsTM was conceived.

Affectionately known as Sara and Amu, the gregarious husband-wife team has facilitated workshops for participants of all ages ranging from 18-months-old to 96 years of age, as well as children with special needs and individuals with disabilities. They've designed their programs and workshops to help with mental health. “What we really want to do is to bring mental wellbeing as the focal point of our society,” Sara said.

The pair has staunch views on dementia: it isn’t solely a biological disease and it can be prevented through regular mental stimulation, as studies have shown.

Dementia was reported to have claimed its youngest victim, a 33-years-old. “Dementia is no longer an old person’s disease,” Sara said. “Psychologically speaking, when you got stuck in a conversation, you’re just churning it. Then it blurs between what is actively engaged in reality versus what is actively being churned in the mind. That’s when dementia actually happens.”

Sara and Amu emphasized that there’s a significant correlation between mental wellbeing and physical wellbeing. They exemplified with a story about a group of elderly Italian migrants in a small town in America, who are living a long healthy life, without any cases of heart attack. All because they have never used the word “lonely”. And this is why mental stimulation is an important factor in dementia prevention. Amu explained: “Neuroeducation is important to people with Alzheimer's and dementia, as it creates a multi faceted approach to mental well-being. It engages the participants from both a biological and a sensory perspective.” Through their programs, they've shown how Neuroeducation helps with dementia.

The dynamic duo currently works with the residents of Apex Rehabilitation Centre and Sunshine Welfare Action Mission (SWAMI Home) including people with stroke, dementia and Parkinson’s.

The elderly is a passive yet delicate group of people because their outlook on life is rather dim; they believed that they’ve achieved all they could in life and now their lives have come to an “end”.

Sara said with this group of participants, human interaction is key. Living in a nursing home, their communication and interaction with the outside world is limited. Their day involves a few hours in front of the TV and some physical exercises. Mental stimulating activities are next to non-existent. And that is why  NeuroCeramicsTM workshops work wonders for the participants, engaging their senses and thinking processes. 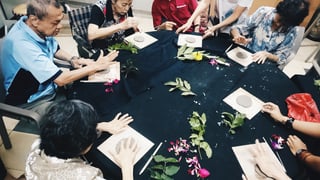 Amu also raised the pertinence of utilizing different props when working with elderly participants, especially ones with dementia. Multimedia is one of them. Incorporating the use of new technology empowers the elderly, making them feel that they’re moving with the times. Amu highlighted that flowers (her favourite!) help trigger fond memories of their kampung days, which then makes their eyes light up. It was like they got their second wind. They eventually opened up and shared their life stories through their artwork.

And their works are nothing less than extraordinary – even in their raw forms. Unglazed letter holders and ornaments depicting their life stages: every artwork is unique; each one has its own story to tell.

For Sara and Amu, even the littlest progress can be rewarding. But they were over the moon when their participants from the SWAMI Home, all with dementia, remembered what they did in the previous workshop! Now, that’s result.

SPREAD THE WORD: Sara and Amu are looking for supporters and sponsors. As some centers are unable to afford the programs, they’d like volunteers to help bring these programs to those centers.

Clay was the couple’s medium of choice, not only for its therapeutic qualities but also because it is “progressive and adaptive”. Clay has a lifecycle – “longevity, object permanence, tactile cognition” – which can be seen as symbolic and becomes a trigger point, stated Sara.

The NeuroCeramics workshops are designed to engage the participants using various themes. Each session involves exploring a topic using clay where participants create a clay piece and decorate or design it using the content of the session. 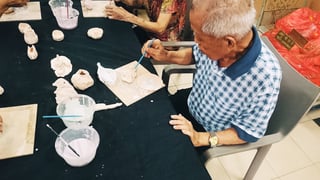 According to Sara and Amu, they would generally assess the participants during their first workshop and they’ll model the following sessions based on what the participants have accomplished. Each program cycle runs for six months with four sessions per month. And each session is approximately one and a half hours long.

Unlike other clay, the NeuroCeramicsTM products are “meticulously designed towards the psychomotor capabilities” of their participants. Amu continued to explain that their programs are different to other dementia programs: “Our workshops are different as we have embedded an inquiry process for the participants. Our sessions allow our participants to discover the content for themselves as opposed to other workshops that exist at the present moment.”

The power couple have developed NeuroCeramicsTM take-home kits that will be available end of August. This is for Caregivers who are looking to upskill and incorporate Neuroeducation into their professional portfolio.

The home kit comes in three types, based on the Caregivers’ clientele: 18-months to three-years-old, four-years and above, and elderly. The kit includes a half-day course, to train Caregivers on:

The training can be suited for business to business as well as business to consumers. There are four parts to the take-home kit with each costing $35 per box, or a subscription of $140 per month.

Da Vinci Group will be engaging the seniors in the public very soon through sessions at community centers – for the first time! The program would be suitable for participants ages 50 and above. So watch this space! 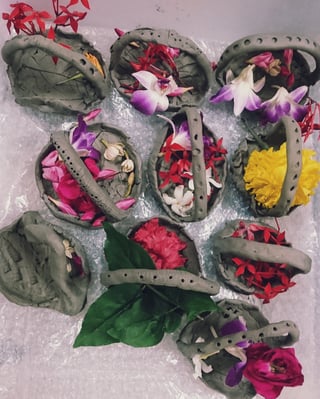 Having personally met Sara and Amu, I have to admit their spirited energy was truly contagious, to say the least. And it was hard not to be inspired by the feel-good quotes scribbled on the windows and mirrors of their home studio. One in particular jumped out at me: “It’s about having things in existence!”

When Sara told me about Da Vinci Foundation and Da Vinci Hospital, I could see the motivation in his eyes. “We wanted to take matters into our own hands,” he declared. Da Vinci Foundation is an existing initiative to impact society and provide an access to transform education for all age groups. The foundation focuses on three groups – underprivileged children, elderly and scholarships for individuals whose business models would impact society in a positive way.

Da Vinci Hospital, on the other hand, is in the pipeline for the next five years. Not a hospital per se, but it’ll be a home care access for the elderly in the hope to alleviate the burden on hospitals.

We at CaregiverAsia wish Sara, Amu and Team Da Vinci well and may each day bring progress and get them closer to their dreams!

And with this, we hope to continue to spread the word on the help that is available for Careseekers as well as an open invitation for experienced Caregivers to join the CaregiverAsia community. Caregivers who post services on the CaregiverAsia website practice 100% of their own terms, right down to their availability, and service costing. There are no subscription fees or posting fees for Caregivers. 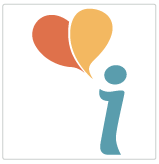 Ann is a CaregiverAsia Powerpuff girl by day, mother by night. And a prudent Caregiver who believes balance is key. When not training for her next IRONMAN race, she scourers the neighbourhood for tasty epok-epok. Good thing she likes to share ‘cause sharing is caring!