We are pleased to introduce you our Caregiver of the Day: Sky Ang - Skilled Nurse for Home Care

Sky is not your typical twenty-something. For starters, he's not a selfie addict. He's also a Nursing graduate from Nanyang Polytechnic - nursing being a path chosen by far too few in a country that needs more and more nurses. 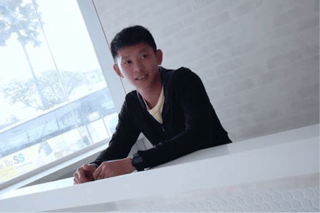 Sky is now a freelance nurse on his way to embarking on the next stage of his career development - a fully-sponsored Nursing degree course in Brisbane, and the story behind this is also far from ordinary.

As a trainee, Sky had faced many challenging moments. However, Sky soldiered on in his postings and rotations - he found his stint in the Institute of Mental Health to be the most interesting one. After graduation, Sky eventually worked his way towards becoming agency nurse, specializing in home nursing. It was there that he met a future benefactor.

The patient was a professional in his eighties, who had collapsed from a stroke that affected one side of the body. During this time, Sky would visit and care for the patient at the hospital, even outside of his working schedule. Eventually, Sky developed a good rapport with the patient and family. It was not easy developing the trust of a family of professionals - the patient had not only a wife, but also a daughter who practices as an oncologist.

Time passed, and the patient recovered enough to walk with minimal assistance, but frequently requested Sky to drop by at his office. And then the day came when the family made Sky an offer he could not yet accept - a full sponsorship for him to further his studies, in a full-time degree course in Nursing.

Sky would continue with his agency work for some time before striking out on his own. The patient's wife has since passed away, but the family's support and offer has persisted, and now Sky is well on his way to achieving his dreams.

Yet, Sky's dreams are not ordinary ones. Sky's ambition is to set up a nursing home when he reaches his fifties. This alone sets him apart from most twenty-somethings of today. Instead of working towards running a hipster café or gunning for corporate success, Sky is motivated by the plight of the many elderly patients he has worked wit

"You realize this when you put yourself in their shoes", he said. And Sky has the appropriate skills to actually help the elderly.

We wish Sky Ang all the best in his future endeavors. Meanwhile, he remains open for home nursing engagements.