A member of Singapore’s "Pioneer Generation”, Raymond Wee’s work history is rich and storied. Uncle Raymond, as he is fondly known to us, started working in the air transport industry as an auxiliary police warden – inspecting saleable inventories of Singapore Airlines. Self-taught in computer science, he then moved to the Ministry of Defence … We cannot say very much about his secret work there, except that it included some research work.

Now at 79 years of age, Uncle Raymond has been a Caregiver for almost two decades, specialising in medical escort services, as a Patient Service Associate with Singapore General Hospital and later a care companion to many. He is also an associate with iCare Life, and also carries out private caregiving services.

Uncle Raymond fondly remembers Mr C, a former client of his, who was referred to him by iCare. Mr C is a social welfare grant recipient whom Raymond chaperoned to numerous medical appointments. The routine involved Uncle Raymond calling Mr C before picking him up from home. “It’s a miracle he is alive,” recounted Uncle Raymond, refering to Mr C’s many ailments. He's had a heart surgery, has prostate cancer, and wears an artificial leg after losing a limb to diabetes. He is also a cancer survivor who had a relapse after six years, and just had a cornea operation.

Uncle Raymond used to escort him at a subsidized flat rate of $20 per trip, up to 10 times per year. Although the client relationship has ended, Uncle Raymond still regards Mr C as a friend. “Tomorrow, maybe I may visit,” he said. “Mr C will call me when he is discharged. He is like a friend to me, after checkups, we would go to have dim-sum at SGH." 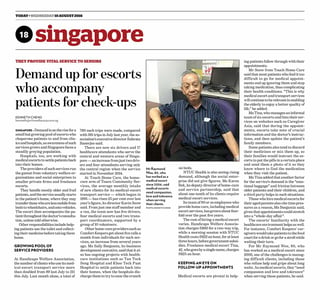 Uncle Raymond also has experience with dementia patients, who he finds are “not easy to handle”. One of them was a 63-year-old man, Mr S, whom Raymond used to visit three times a week. “We don’t tell him that we are his Caregivers,” he stated. “We say we are neighbors. Dementia patients keep forgetting stuff.” Uncle Raymond’s approach includes taking photographs to help dementia patients remember basic information. Mr S eventually deteriorated into being a danger to himself, so Uncle Raymond advised his family to place him in a nursing home run by the Salvation Army. He continued visiting Mr S, who was faring “very nicely and had neat hair, but felt like he was in prison”. Summing up his approach to dementia patients, Uncle Raymond said, “We have to serve them, give our love to them no matter how hard it can be sometimes.”

And with this, we hope to continue to spread the word on the help that is available for Careseekers as well as an open invitation for experienced Caregivers to join the CaregiverAsia community. Caregivers who post services on the CaregiverAsia website practice 100% of their own terms, right down to their availability, and service costing. There are no subscription fees or posting fees for Caregivers.