Bringing you Caregiving Stories from the CaregiverAsia Malaysia Community 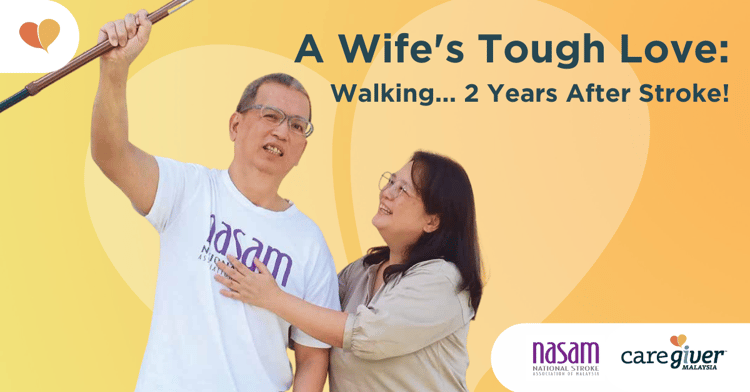 Voo Kim Sin was in Tokyo when he suffered a massive stroke attack in April 2019. He had been living in the Japanese capital for 17 years where he was working as a purchasing manager in a food trading company. He led a busy life and although he had a history of high BP, he was not taking any medication.

At the time of his stroke, on April 5, 2019, he was 51-years old. He was getting ready for work when he realised that he could not move the left side of his body. He held on to the shower rail for support. He yelled out from the bathroom to his wife who came to his aid immediately, but he was too heavy and eventually he slowly slid to the floor.

He was rushed by ambulance to the nearest hospital within 30 minutes. Doctors advised an emergency operation because his condition was critical. He had a haemorrhagic stroke in his right brain which caused his left limbs to become paralysed.

The operation took about seven hours. After surgery Voo had a second stroke. Doctors preferred not to intervene and advised that the body be allowed its own time to make necessary adjustments. It took about five days for this adjustment to happen. Before the stroke, Voo had a high BP issue, which was mainly left unmedicated. After the stroke attack he was found to also have high cholesterol.

He stayed in the ICU ward of Mizue Hospital in Tokyo for about one month. On May 13, 2019, he was transferred to Sakura Rehabilitation Hospital. Here he did physiotherapy for three hours every day. After his discharge on September 13, 2019, his wife brought him back to Malaysia.

After my husband suffered a stroke attack, a lot of things in my life changed. When he was in hospital in Japan, during those five months, my life just revolved around my office-hospital-and home. There was no time for anything else but to get from one place to the other every day and do what had to be done.

Taking care of my husband was a priority. Before his stroke I had time to meet up with friends and pursue other leisure activities…I had a life of my own.

When my husband had the stroke, the biggest change, and one I found to be a huge responsibility, was having to make life-changing decisions on my own. Before the stroke we would discuss and decide on things together. However, after his stroke I had to take over every responsibility and decision making and manage both our lives. I couldn’t think too far ahead and could just handle each day as it came, focusing mainly on getting him better.

During this agonising period I had just one thought – to help him stand up and walk, even if it was with a walking aid. This was sufficient for us, even though the doctor had informed me that it was almost impossible for him to achieve such a goal. 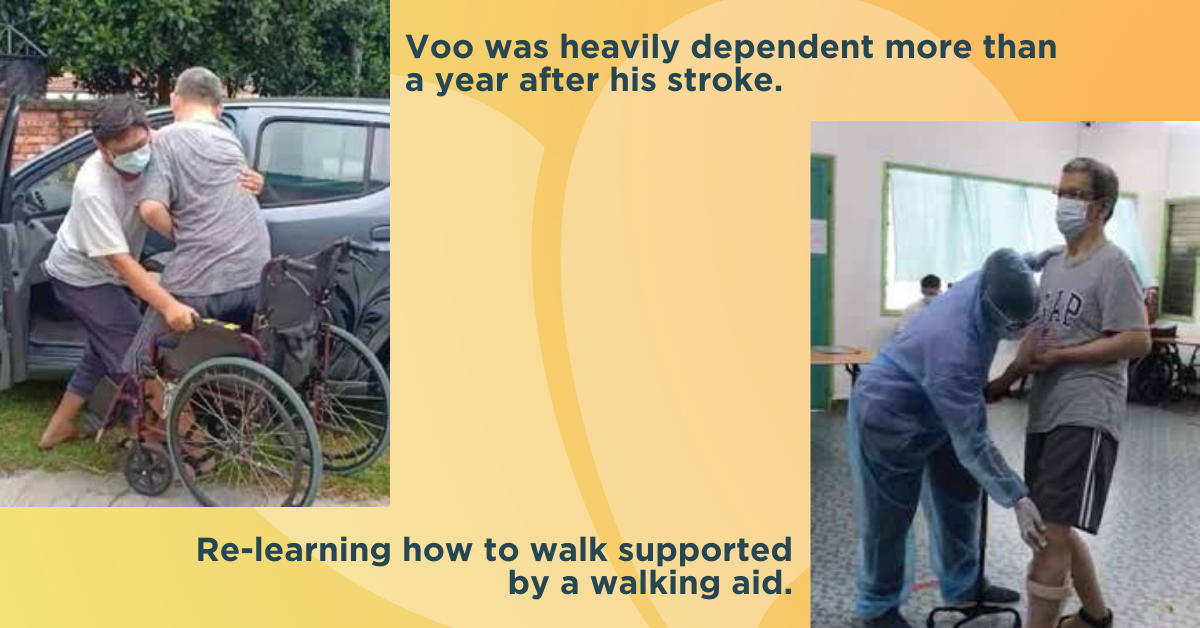 In September 2019, after much thought, we decided to return to Malaysia for post stroke care. My husband was admitted into Tung Shin hospital in KL, until December that year. I was with him every day, helping to care for him and also support him during rehab. But I could only be with him for about three months, till November, as I had to return to Tokyo to hand in my notice at work and also tie up many other matters before returning to Malaysia.

While I was still in Japan, my family took Voo to my hometown in Ipoh. This was in December 2019, where he had private physio for six months. Unfortunately, the physio did not improve his ability to walk and even there we were told that he would be confined to using a wheelchair.

A relative later told us about NASAM and we registered Voo with the Perak centre on June 23, 2020. This was a good 15 months after his stroke, and by then he had become wheelchair dependent and depressed. He was also very unhappy about having to rely on family members for all his daily needs.

Voo’s goal when he first started rehab at NASAM was to be able to go to the toilet independently. He visited NASAM three times a week for one-on-one therapy. It took him two months to accomplish this first goal. Once he achieved that he seemed a little happier emotionally. As I was still away, all I could do was to motivate him over the phone. I used to speak to him at least twice a day.

With the encouragement and support he got at NASAM, Voo’s fighting spirit soon returned and he bravely set his next goal – to be able to walk independently and do away with his wheelchair, which he had been using for nearly two years.

The task was a mammoth one because his limbs were extremely weak at this stage, and he had to be fully supported by his carer when standing and moving. He tried hard to fight his pain as he desperately wanted to regain some mobility, but progress was very slow, even after six months of trying. 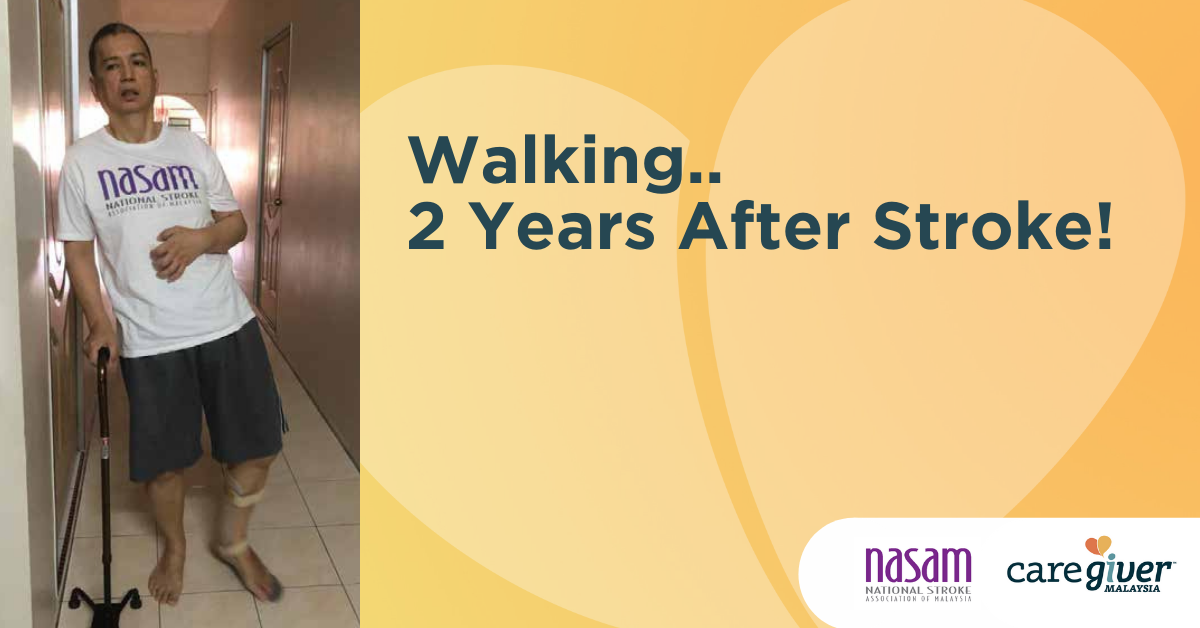 When I finally returned from Japan in February 2021, Voo was 53-years old and a stroke survivor for 23 months now. Along with the physiotherapist, we decided to work together to help him achieve this goal. At NASAM we were guided by our physiotherapist Ananthi, who focused on re-training and stimulating the limbs by working on issues such as strength and balance. I watched and learned and when we returned home we would rest awhile and then keep practicing for at least one hour every day.

Two weeks after my return, we reviewed Voo’s progress and noticed some improvement, which helped us gain more confidence and hope. This also spurred us on to work even harder. The tremendous changes in Voo made me more ambitious – I could see the potential of him walking independently, without relying on any aids.

On April 23, 2021, two years after his stroke, Voo started walking with a quad stick. I know now it won’t be long before he does not have to rely on his stick, because he has come through his challenges with much grit and determination. I am very proud of him. It has been extremely rewarding to be part of his stroke recovery.

This experience has made me realise how crucial family support is when it comes to taking care of a stroke survivor. A carer, be it a wife or a husband, cannot achieve any progress on their own on such a journey. In my case, I had strong support from my family members. Without that I don’t think I could have cared for my husband in a positive way. Friends and family kept me strong, hopeful and motivated.

Motivation is crucial when it comes to getting stroke survivors to keep exercising willingly. After I returned to Ipoh, I treated Voo as my husband and friend just like we were before his stroke. Till today, I talk to him about everything that’s happening to us and around us and share jokes to get him to laugh. I also make sure that the environment we live in is positive and happy. When friends call, they too make an effort to give him positive and happy news.

I remind myself that I am lucky to have a second chance with him. Stroke has tested our relationship, but our love for each other has helped us get through the challenges and we have emerged stronger.

So, Yes! There Is Life After Stroke and we celebrate every day that we have together.

Stroke Awareness & How To Prevent Stroke

Supporting Someone After Stroke

Caregiver Asia (Malaysia) Sdn Bhd is an online aggregator of health and caregiving services. We provide home based healthcare and professional nursing / physiotherapy services and training. If you are looking for healthcare services or interested to join us, kindly click on the link below.

NASAM’s Mission is to inform the public that there is Life after stroke through proper rehabilitation and to promote stroke prevention. NASAM’s objectives are to create awareness about: • Stroke can be reduced or prevented. • Early rehabilitation reduces long-term dependency. • There is life after stroke. NASAM’s Vision is to make its rehabilitation programme available to as many stroke survivors throughout Malaysia. It has been serving the stroke community since 1996. Besides that, they strive to meet the rehabilitation needs of stroke survivors after they are discharged from hospital. Their long term goal is to reach the rural community by setting up a centre in every major town in Malaysia.