Mummy's & Daddy's Take on Being a New Parent During Confinement Month

Ah.... the arrival of a baby usually heralds joy, happiness and hope in a family's life! Grandparents, aunts, uncles, brothers, sisters, best friends would drop everything that they are doing to rush to greet baby and the new mummy! New grandmothers would hug their daughters with tears of pride in their eyes, and new aunties would hug their new nephew or niece with tears of adoration in their eyes. Everyone would gather around the mummy carrying baby in her arms, and comment about how cute baby is, and how mum is looking great especially with the delivery glow!
Hmm... is this scene missing someone? Yes, where is daddy? Daddy is there of course in the room, beaming with as much pride and happiness, but daddies are often in the background when it comes to the post delivery scene, but they are just as important, as they are the primary wind beneath mummy's wings.
While we often hear from mummies on their experiences of being a new mom and their experiences of confinement month, the daddies' side of their experiences as a new dad is often not mentioned. Yes, part of the stereotype is that daddy is "manly" and would not share their "feelings" (ahem!), but more often than not, it's because no one actually asked them! Hence, we thought that it would be fun this weekend, to share with you the the story of the Ta family's confinement month journey, told two ways, one from mummy's (Dawne Ta) viewpoint and the other from daddy's (Tony Ta)!
Mummy's Confinement Month 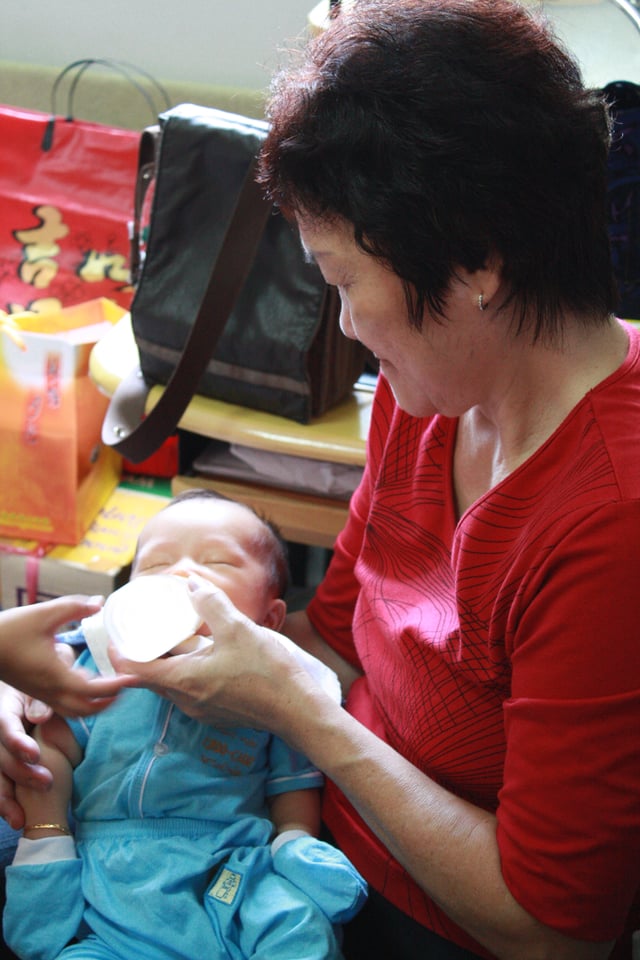 I've never considered myself traditional so the thought of going through confinement with the strict dietary and hygiene (no bathing!) rules didn't appeal to me. However, I knew that I needed rest, nourishing food and help with the regular feeds. So I started asking around and looking on websites to find a good confinement lady in Singapore. I read and heard about horror stories of nannies being heavy handed, very pushy, unhygienic and some just walking out. But for me there is always two sides to the story and everything sounded very similar to problems with domestic helpers.
I was fortunate to have my first confinement nanny, Mei Xiang, recommended to me by a friend. From the beginning I was very happy and thankful that she was there. My son had a reflux problem and with her experience she knew immediately how to remedy this and taught me as the same time. She explained to me the benefits of following the strict confinement rules but never imposed them on me. I told her I couldn't handle not bathing so she suggested taking warm baths instead and immediately drying my hair to avoid letting 'wind' settle into my body. To allow me to rest she slept with my son and used my expressed milk to do the overnight feeds. Her confinement food was good but hey at the end of the day it is the same type of food everyday for a month so yes you do get sick of it.
The 28 days flew by quite quickly and I did consider to extend her for another month but she was already booked for another confinement. I also tried to book her for my second child two years later but she was booked as well. Confinement isn't for everybody and I certainly didn't think I could go through with it. Having been through it twice though I think any help a mother can get in the first month is beneficial both for mum and baby.
Daddy's Confinement Month 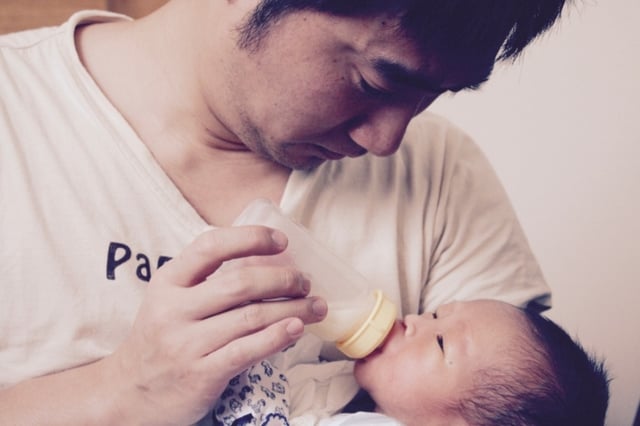 My first thought - what on earth is this confinement and why would my wife subject herself and our first born through it! The word says it all - confinement! Synonyms include imprisonment, internment, incarceration! But after doing a bit of research I find out that it is quite a common practice with Asian mums. I was fortunate enough to take 3 months off when our son was born so I got to experience everything including the confinement.
Firstly, let me say that I have complete and utter respect for all mothers because no man could ever endure what a woman goes through with pregnancy, giving birth and then motherhood. So any help a mother can get does wonders for her recovery and mental well-being (think post-natal depression) so lads get off your lazy butts and help change a nappy once in a while. Our confinement nanny arrived the day my wife was discharged from hospital. She immediately got into action. My son was a little jaundiced and without us telling her she knew. She asked if it was okay to let him sun bathe for a few minutes everyday (something the doctors told us to do). I remember thinking, wow this nanny knows what she's doing.
Are you welcoming a little one and need an extra pair of hands to help you during your confinement month? Click below to book or call us at 6258 6683!

Over the next few days Mei Xiang settled in with us and we got into a nice routine. We had a separate room for our baby and she slept with him. Sometimes she would come into our room and wake my wife up to breastfeed if there wasn't enough expressed milk. I thought it would be a good idea to sleep in a shorts and t-shirt just in case. Otherwise she was very respectful of our privacy. Communication with me was very limited as she didn't speak English but I was only needed to buy the ingredients for the confinement food. We got around this by getting my wife (and google) to translate the ingredients she wrote in Chinese on a piece of paper. Whenever she needed more of something she would point to that ingredient and showed me how many she needed with her fingers. Simple. The rest of the confinement went very smoothly. I'm sure this was because of all her years of experience.
I'll be honest, when she left and we had to pick up the night feeds, cooking, washing it was difficult but Mei Xiang had shown and taught us enough to look after our bubs ourselves (I became an expert in swaddling!) If I knew up front what I was signing up for in those first 3 months I don't think I ever would have done it. But after going through it, and with the things I learnt from our confinement nanny, I wouldn't trade those precious moments for anything.
Looking for confinement nanny in Singapore? Here are some related articles you might like:
Watch an interview video of our highly experienced confinement nanny

Learn how to find your perfect confinement nanny here!

Here are more articles on pregnancy and postnatal care..

Topics: All About Pregnancy