Madam Lee Yan has 41 years of healthcare experience and provides post-natal care, teaching new mothers how to take care of the baby and themselves.

A retired pensioner with two adult daughters, Madam Lee started training in 1962, and in 1964 she was a qualified Registered Nurse, and commenced her career with the Maternal and Child Clinic (“MCH”) system, starting at KK Hospital, and moving around various clinics - she was deployed, among other places, to Prinsep Street MCH, Jalan Kayu MCH and Yio Chu Kang MCH. By 1980, Lee Yan transferred to the now-defunct Toa Payoh Hospital.

And those were the scary days as well as fun days.

The Prinsep MCH stood at the southwestern end of Prinsep Street, and that was where nurses had to stay overnight to entertain emergencies, such as ladies going into labour in the middle of the night, or urgent requests for medication. It was a three-storey building, and allegedly was used as a dumping area for corpses during the Japanese Occupation. Nobody liked to go through “the back area” which Madam Lee had to pass through in order to meet late night visitors. That building was eventually occupied by the Registry of Vehicles, and today is occupied by the Elections Department.

The other MCHs were nicer places – that was where Madam Lee met the villagers living in the northern part of central Singapore. Husbands would sometimes ferry nurses on motorbikes deep into the jungles to tend to their wives. Other times, nurses hitched a ride on a lorry full of pigs. However, the villagers were generally very nice people and village patients were a very grateful lot. To this day, Madam Lee is remembered by the villagers and their families after they have resettled in the new towns – people in the Ang Mo Kio markets still remember, which is just as well, since she stays nearby. 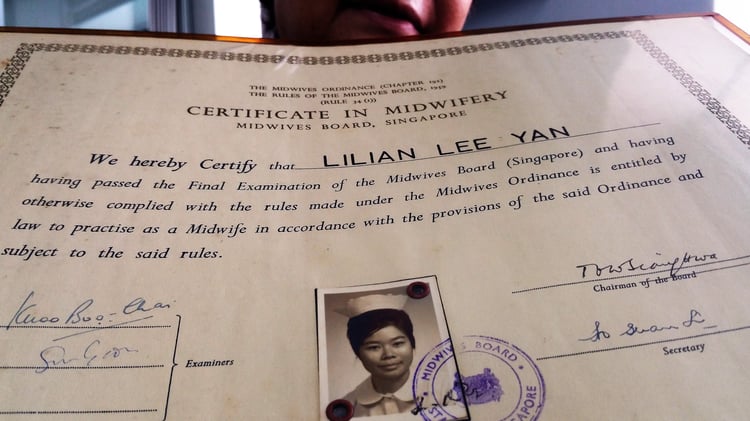 Meanwhile, in 1990, Madam Lee was absorbed into the Ministry of Health’s School Health System and started caring for children in our nation’s primary schools, until her retirement as a pensioner.

Her retirement didn’t last long, though. By 1998, Madam Lee had been called back by the Ministry of Health to help out in a new hospital with a very familiar name - by that time, KK Hospital had moved to new premises, expanded its mission and departments, and had been renamed “KK Women and Children’s Hospital”. Madam Lee was working there part-time for 4 days a week in the nursery and delivery wards, including handling post-op care. She would stay on to help KK Hospital for seven more years.

When 2007 rolled by, Madam Lee joined SingHealth’s Silver Connection providing post-natal home care, and in 2009 she started assisting Anlene to carry out promotional bone scans because you need the experience of a Registered Nurse to meaningfully explain the scans and the processes.

In 2015, Madam Lee joined CGA. She normally contracts on Thursdays for up to five hours a week. If you would like to book Madam Lee’s services, click on the link below!